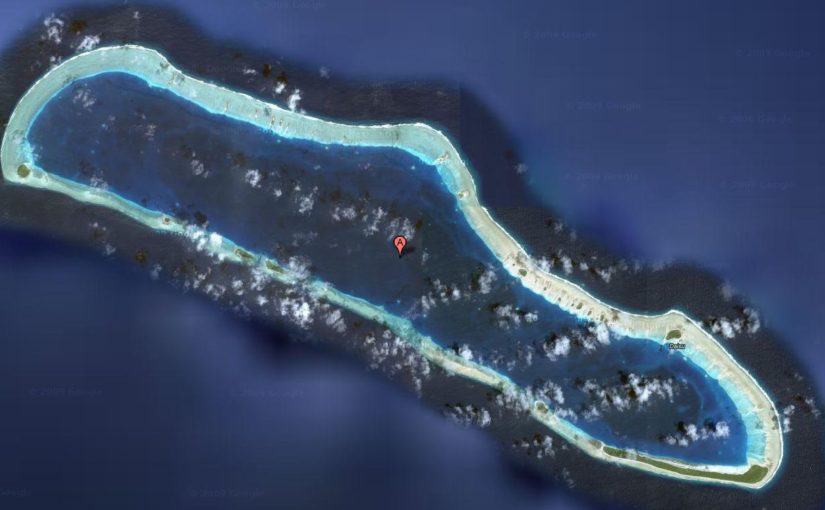 Ujelang, the Past and the Present

The Ujelang Atoll is a small collection of islands in the Pacific Ocean. Throughout its history is has been claimed by several different world powers and companies. It has no more native inhabitants, but has had residents from other nations and for a brief period of time (1947 until 1980) was the home for the relocated individuals from the nearby Eniwetok Atoll.

Geography of the Region

Today this area is a coral atoll of about thirty islands, which are arranged in a circle around a large lagoon area.

Early History of the Islands

Like the rest of the Marshall Islands, this atoll has traded hands many times, in part because it is so small that the various powers which claimed it rarely bothered to inhabit it, nor defend it from others.

The first European to discover the atoll was Álvaro de Saavedra Cerón, a Spanish explorer, who landed there on 21 September 1529; the exact dates of his birth and death are unknown, but it is known that he died shortly after discovering the islands. He was notably a cousin of Hernán Cortés and sailed with him to New Spain (modern Mexico) in 1526. At the time he was trying to return there from Tidore. He named the inhabitants Los Pintados, Spanish for “the Painted Ones,” because of their heavily tattooed bodies.

While other Spanish explorers passed the islands and made of them (including Ruy López de Villalobos on 6 January 1543 and Miguel López de Legazpi on 15 January 1565), Europeans would not return until the Providence, a British merchant vessel employed by the East India Company, arrived in 1811; they named its largest island Providence Island after the ship. At the time Providence was making a circuit ship whereby they dropped off convict in New South Wales, Australia, and then picked up cargo in China before returning to its homeland.

In 1880, the atoll was the property of private German companies; they maintained a copra plantation on the largest island. In 1884, meanwhile, the Empire of Germany managed to formalize a claim to all of the Marshall Islands. The United Kingdom ceded its claim in exchange for Germany recognizing its rule over the Gilbert and Ellice Islands; Spain, meanwhile, sold its claim through papal mediation. All of German’s holdings in the region were eventually put under the aegis of German New Guinea.

Following World War I the South Pacific Mandate went in effect, and all of German New Guinea was ceded to the various Allied countries; Japan received the Marshall Islands and others to the north of the region.

During World War II, from 22 April 1944, the United States Army’s Company I, 111th Infantry Regiment occupied the largest island of the Ujelang Atoll, which it used as a staging ground for the invasion of Peleliu in February of the following year. After the war ended, the Trust Territory of the Pacific Islands put all of the Marshall Islands under American control, which lasted until they gained independence in 1986.

Throughout this period the native population was incredibly small, numbering only 40 individuals in 1935.

Nuclear Tests and the Relocation from Eniwetok

Between 1948 and 1958, the neighboring Eniwetok Atoll was the subject of atomic tests by the United States as part of the Pacific Proving Grounds. All told, 43 nuclear tests were performed, which in total equaled more than 30 megatons of TNT.

The residents of Eniwetok were repeatedly, and in many cases involuntarily, evacuated to prevent their harm from the nuclear tests; starting in 1947, the Ujelang Atoll was one relocation area for the Eniwetok people. Originally 145 when the program began, the population grew 342 by 1973. However, the living conditions were still quite difficult; especially during the 1950s, there was very little supply of food for the inhabitants and often epidemics were common.

The former residents of Enewetak wished to return to their home islands, and in 1979 the United States government met with them; most of their representatives came from the Department of Energy (DOE) and the Department of Interior, and their legal counsel was a Mr. William L. Brown. However, public opinion back in the United States favored the islanders, particularly when a 60 Minutes segment about them aired on CBS, with several reruns.

By this point much of the cleanup was complete; a giant concrete dome, known as the Runit Dome, had been constructed on Enewetak’s Runit Island to contain much of the radioactive material, and aside from a few areas (which would not become clean until 2010), the atoll was deemed safe to inhabit.

Therefore, in 1980, the entire population of the Ujelang Atoll relocated back to the Enewetak Atoll; about 100, however, temporarily moved back, finding the geography of the old islands insufficient for the larger population that had developed over the years. Nevertheless, they too left in 1989, and since then the atoll has been uninhabited. It is legally still under the control of the Enewetak Council but today remains mostly empty and is only rarely visited.

CEO / Co-Founder of Meloncast and PhD candidate at the University of St. Gallen. Interested in business and technology.